Okay, so imagine you’re in Japan.

For lovers of Japanese fiction/non-fiction, there’s Kinokuniya.  For lovers of manga, light novels, and anime merch, there’s Animate.  And then, my friends, there is a store for those of us who like all of the above but are on a budget.  That’s Mandarake.

Mandarake (まんだらけ) is a multi-story anime/manga media store found in a number of locations throughout Japan.  The store is chock-full of anime CDs, DVDs, even VHS tapes (it’s true!), collectible figurines, cosplay gear, toys and cell phone charms, fan-made doujinshi and, best of all, a jaw-dropping quantity of used manga.

I went to two different Mandarake’s when I visited Japan: one in Akihabara (Tokyo) and one in Namba (Osaka).  The photo above isn’t mine, but that’s the Namba branch of the store.  And no, your eyes do not deceive you:  Those are shelves of used manga literally chilling outside the building. 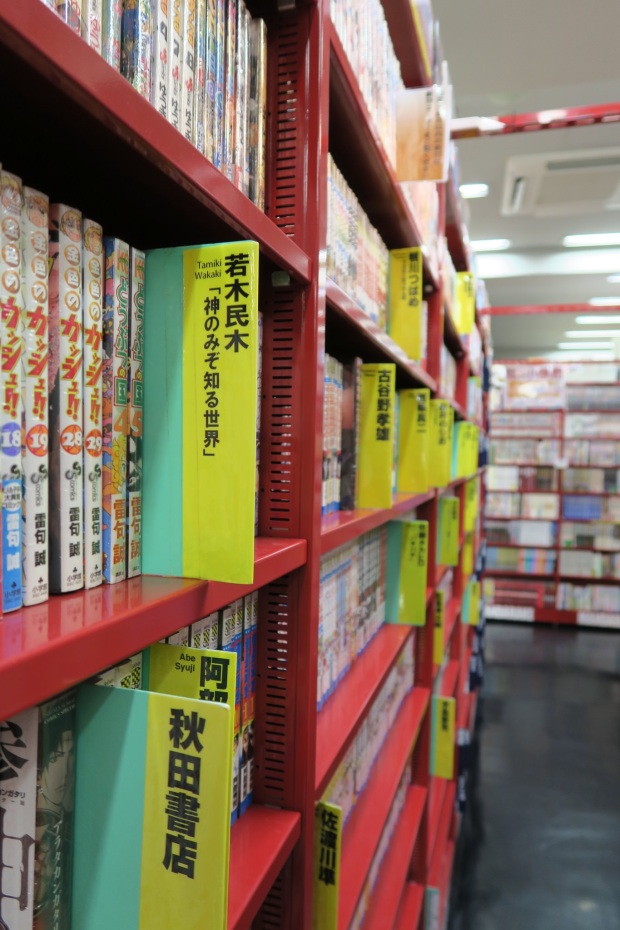 I very often delude myself into thinking I know Japanese better than I actually do, especially when it comes to reading.  I’m horrible at reading Japanese.  You’d be amazed how undeterred I am by that fact when I am in store such as Mandarake.  One of the most difficult things about this store was actually navigating around and trying to find a specific title.  The manga seemed to be classified by genre first, and then by the magazine it was serialized in, and then by author.  So basically, I was wandering like a lost sheep most of the time, under the guise of “browsing” casually.

I did spot some familiar titles. 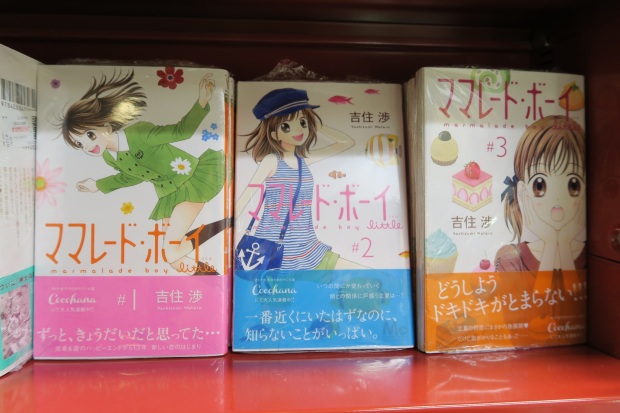 Throwback to early high school.  You will not believe how emotionally invested in Marmalade Boy I was.  Funnily enough, it’s one of Theo’s most memorable mangas too.  We don’t overlap a ton in terms of what we’ve read or watched so that was pretty interesting to find out!

Believe it or not, it wasn’t too difficult to walk away empty-handed from normal bookstores like Kinokuniya.  One tankoubon at Kinokuniya is $6.20 in the U.S. and roughly the same price in Japan; I wouldn’t save money by buying manga or novels in Japan.  But used manga in Mandarake run as cheap as ¥200 (1.60 USD) and are in practically new condition.  That was true temptation.

In the spirit of bonding over manga that we’ve both read, I picked up volume 1 of a couple of Theo’s favorites.  Orange in particular was quite popular, probably because the final chapter release a few months ago.  There’s apparently going to be a live action movie too, releasing in Japan this December.

Slowly, but surely, my Japanese bookshelf grows.  One of these days I’ll actually finish something on it.  My first ever Japanese novel was 告白 by Minato Kanae, the novel which gave rise to one of my all-time favorite movies.  A friend gave me the novel… oh, three or so years ago.  And I still can’t make it past the third sentence without stumbling across kanji that I can’t read.

One of these days!